#TheAdjudicator: To clean or not to clean… 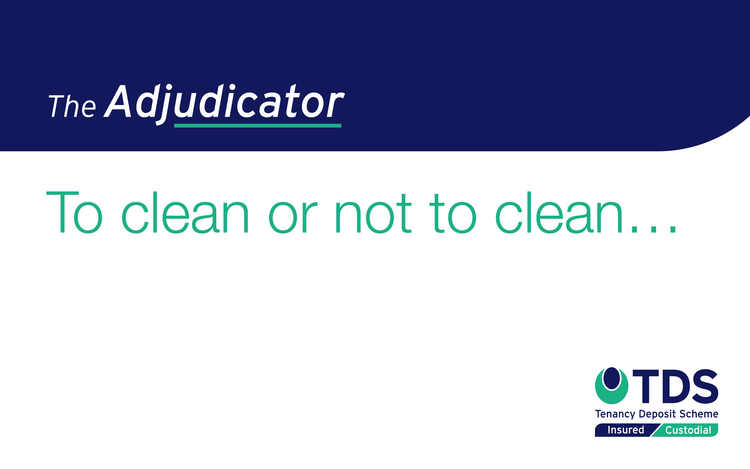 The Adjudicator takes a recent decision by a Tenancy Deposit Scheme (TDS) Adjudicator and sets out the reasoning for the possible deduction of tenancy deposits. The aim of these case studies is to help agents, landlords and tenants better understand how we make our adjudication decisions and what can be learnt from them. The names of the landlords and tenants involved have been removed and this is only a summary of the dispute in question.

During harsh winters and extreme weather conditions, there is an increased likelihood of mould/condensation issues arising in properties. In this case, the landlord wanted to keep the tenant’s deposit because the décor in the flat had been damaged during the tenancy by mould; this needed to be wiped clean and repainted. The tenants acknowledged that mould marks were present at the end of the tenancy and had agreed to pay for cleaning costs but felt it was unfair that they should pay twice – once for the attempted clean to the affected areas and again for the re-decoration.

The landlord had produced no evidence in the form of quotes or invoices to give a breakdown of the cleaning and treatment of the mould affected areas or for re-decorating. Without evidence of the age of the décor, the adjudicator considered a contributory award be fair towards the landlord’s claim for cleaning and redecoration.

Key Pointers to Take Away

For access to more #TheAdjudicators, case studies, blogs and guides visit the TDS Lounge today. If you would like to learn more about tenancy deposit protection and how adjudicators think, our TDS Academy Online sessions provide property professionals with expert knowledge. To book your place on the next TDS Academy Online courses please click here.

TDS Custodial: where TDS hold the deposit for the duration of the tenancy. Landlords, you can protect your deposits for FREE today.