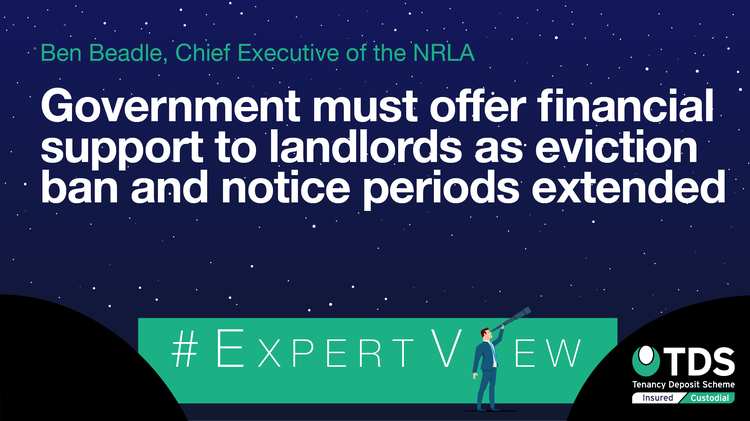 As news broke of the eviction ban extension and increased notice periods last month, landlords would be forgiven for feeling angry, frustrated and overlooked.

The Government waited until the eleventh hour to U-turn on plans to reopen the courts on August 24 and extend its stay on possession (already in place for five months) until September 20, as well as bringing in a new six-month notice period across England and Wales (albeit, effective from different times and with some concessions).

We understand that frustration.

Our most recent research shows 95% of tenants are either paying their rent as usual or have come to an arrangement with their landlords. We know from talking to our members that many are going above and beyond the call of duty when it comes to supporting tenants during the pandemic and keeping them in their homes.

To us, the decision to extend the eviction ban and notice period was totally unacceptable. It was particularly galling to do so one working day before the ban was due to end, and we have told the government so.

While we have welcomed the news – revealed last week – that landlords will only need to give anti-social tenants up to a month’s notice, the perpetrators of domestic violence two weeks’ notice and those who have built more than six months of arrears four weeks’ notice, this means nothing without a cast iron guarantee that the courts will begin to hear cases on September 20.

What can the Government achieve in the four weeks until September 20, that they couldn’t in the last 20?

In our view, private landlords cannot and should not be expected to foot the bill for Government failure.

The solution; a targeted financial package offering practical support to landlords and tenants through these unprecedented times.

In Wales tenants are being offered low-cost loans allowing them to borrow the money to pay off arrears, with generous time frames for repayments – as a result of NRLA campaigning. We would like to see a similar, interest-free scheme made available to tenants in England.

We also want to see significant changes to the benefits system to make it easier for tenants claiming benefits to pay their rent.

These changes include grants to cover arrears racked-up since March along with grants, instead of loans, to cover the five week ‘gap’ in payments at the start of a new Universal Credit claim.

We believe it is high time the Government extended the level of support it has offered to other industries to landlords, who have a vital role providing homes for millions of families and individuals across the country.

Since the start of the pandemic we have seen significant wins.

Amongst these were successful campaigns for the Local Housing Allowance to be changed to the 30th percentile and the extension of the mortgage deferral scheme to landlords.

We were active in persuading the government not to cave in to pressure to rush through the abolition of Section 21 in the middle of the crisis and were able to get official Government clarification on responsibilities regarding rent payments and student lets.

The Housing Minister also frequently quoted and cited NRLA briefings in the Commons.

We have the power to bring about change and over the coming weeks we will be working with the Government to make sure that when the courts do open their doors they are operating as efficiently as they can in the circumstances. Additionally, we are continuing our fight for full financial support for landlords and renters at the very highest level.

“It is worth reminding ourselves that it is in everyone’s interest to sustain tenancies – but rather than closing the only remedy available to a landlord to enforce their contract, the government must ensure additional help is available for renters and landlords when furlough payments end.”

To keep up to date with the latest in legislation changes and tenancy deposit protection take a look at recent TDS case studies, blogs and publications here.

A landlord himself since the age of 20, Ben started out as property manager before working his way up through the ranks at Tenancy Deposit Scheme.