Home»Blog»#AskTDS»#AskTDS: “My tenant is taking me to court...

#AskTDS: “My tenant is taking me to court – can TDS still adjudicate?” 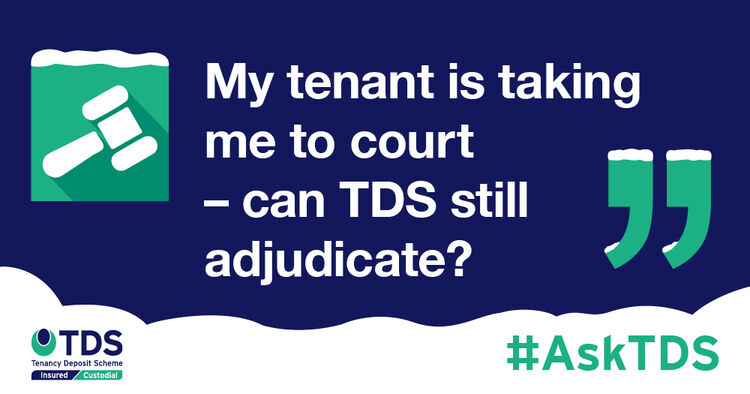 This article has been written in response to a landlord’s query: “My tenant is taking me to court over the return of the deposit, can TDS still adjudicate?”

A question we are often asked by landlords, tenants and agents alike is whether they have to use TDS where the parties are unable to reach an agreement as to the return of the deposit. Most people prefer to use TDS to settle their dispute as the decision is quicker and less stressful than going to court and it’s free. Like a court, our service is impartial, independent and authoritative. We are however an alternative dispute resolution service and therefore an alternative to court.

Although it may be the preferred option for many, either the landlord or the tenant may withdraw their consent at any time and choose to take the dispute to court instead. At the point where consent has been withdrawn on either side, we can no longer adjudicate on that dispute. Once consent has been withdrawn, either a Court Order will need to be obtained, specifying how the deposit should be repaid, or the parties must reach their own agreement and provide us with confirmation of the agreement.

In the instance where a dispute is raised with us but we become aware it has been referred to the court for resolution, we will suspend the ADR process unless the court refers the dispute back to us, or the parties withdraw court proceedings. However, in our Insured scheme, once outside of the three month deadline, we will not be able to adjudicate on the dispute.

If one of the parties opts to go to court where the deposit has been protected under the TDS insured scheme, we would expect to see a court order or at least that action has been taken to reach a resolution within 6 months of consent being withdrawn. If this evidence is not produced, we may pay the other party the deposit amount held, at our discretion, as long as the agent, landlord or tenant were advised of this rule when they withdrew consent.

If your tenant is choosing to take you to court instead of using our ADR process, it is possible that they are lodging a counterclaim against you, as we cannot award compensation or deal with matters that are unrelated to the deposit. You should seek independent legal advice on the best way to deal with a dispute through the courts.

“My dispute has already gone to court – can TDS help?”

TDS are unable to resolve a dispute if it is already the subject of court proceedings or if the parties have reached a legally binding agreement. If the dispute is referred to the court, the disputed amount must still be sent to us and we will pay out according to the decision of the court. Where only part of a disputed amount is subject to court proceedings, we may deal with the remainder of the dispute at our discretion.